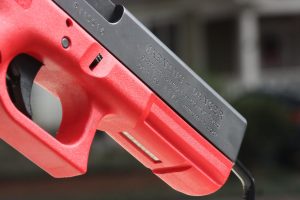 A few years ago I did a blog post titled “Glock 17R: The Mysterious Non-Firing Glock,” which I wrote on a whim. Somehow it became the most trafficked page on my site, which was amusing because the post wasn’t all that good. The post did help me realize what an absolute dearth of information there is out there about the Glock 17R. I decided that a new and revised post was needed—and that’s exactly what you see here. Not only will I break the 17R down in silly technical detail, but I’ll do it side-by-side with a regular Generation 3 Glock 17. This will hopefully sate any questions you have about the 17R. 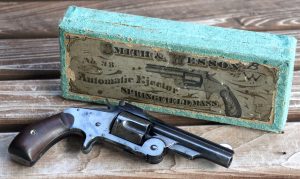 On June 11, 1863, the Connecticut Arms and Manufacturing Company was incorporated in Hartford, Connecticut. Like so many other companies from this era, they were undoubtedly spurred by the massive surge in sales of cartridge load handguns. With the Civil War raging, there was no shortage of demand for firearms of all sorts.

And, in the true manner of Yankee ingenuity, the founders of the Connecticut Arms Company thought they had a great new novel idea. 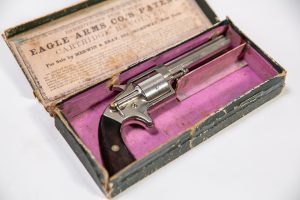 Like Rollin White and Lucius Pond and Christian Sharps and just about every other gunmaker in the 1860’s, Merwin & Bray of New York were looking for a way to effectively complete with Smith & Wesson, whose exclusive license to Rollin White’s patent gave them a monopoly on the cartridge-load revolver that everyone was vying for. The front loading revolver was another example of a gun designed to artfully dodge Rollin White’s patent in a manner that wouldn’t result in a costly lawsuit. In this case, the gun actually did work—but the front-loading cartridges proved to be too much of a hassle to make this gun any sort of real threat to Smith & Wesson. 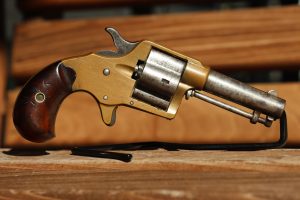 When Smith & Wesson’s patent on the bored-through cylinder expired in 1869, manufacturers were free to adopt that design pattern into their own pistols. Like everyone else, Colt did this with reckless abandon, and one of the pistols to emerge from this was the “Cloverleaf.”

Aptly nicknamed for its cylinder that had a cloverleaf profile, these odd and rather clunky revolvers were manufactured from 1871 to 1876. It chambered the .41 rimfire cartridge, whose snubby dimensions make it a source of fascination for some gun collectors. 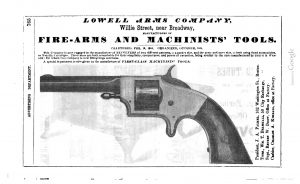 The late 1850’s was a wild time for many gunmakers. Smith & Wesson had turned the industry upside down with its Model 1 revolver, and companies were scrambling to come up with a better design. There were also some that chose to flagrantly ignore Smith & Wesson’s patent on the bored-through cylinder, and the aptly-named Rollin White Arms Company was one of them. 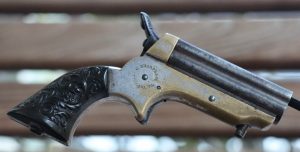 Smith & Wesson’s success with the Model 1 revolver had massive repercussions for the American gun industry. With cartridge ammunition becoming the de facto standard, manufactured had to quickly pivot from the old cap and ball design. To make things worse: Smith & Wesson’s lock on the bored-through cylinder also meant that producing a competing revolver wouldn’t be legal until at least 1869 when the patent was set to expire.

Solutions to this problem showed a lot of creativity, and this pepperbox pistol from Christian Sharps was one of the more successful examples. 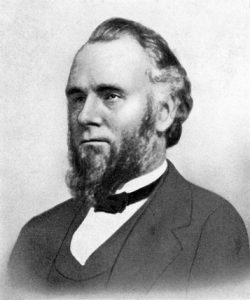 Lucius Willson Pond may not have been a man of high scruples, but he was an interesting character and some of the firearms that he made are a delight to behold.

Born in 1826 in Hubbardston, Massachusetts, Lucius began working as a machinist when he was about 20. By his 28th birthday, Lucius had positioned himself to take over the machine tool business, which he did well with.

Working in the machine tool business in Massachusetts gave Lucius a front-row seat to the state’s burgeoning gun industry, and the success of Smith & Wesson’s cartridge load revolver inspired him to get in on the action. Pond started out by making the “belt revolver” shown here, which did a splendid job of violating the Rollin White patent that Smith & Wesson had exclusively licensed for themselves. 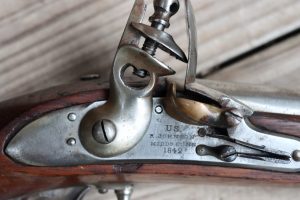 Beauty can be found in many things but few can match the artistry of this flintlock pistol. Made by gunmaker Robert Johnson in 1842, this US Model 1836 martial pistol is a testament to a gunmaker that probably did more for American manufacturing than history will ever give him credit for. To really understand this pistol’s significance, we’ll need to step back a bit.

Nicanor Kendall isn’t a particularly well known name in the world of gun making, but the Kendall musket that I’m featuring today ties into some much broader themes of American gun manufacturing, and it includes a few curious twists.